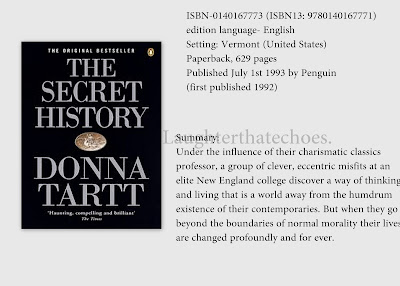 Richard Papen feels trapped in his world. While poverty may have forced him to study veterinary science, he constantly feels himself getting attracted towards literature. One night after a fight in his crumbling household, he finds himself picking up the application to the Hampden College from his messed up closet. It was a matter of a few days until he packed his bags and moved to the College premises.
He is warned against pursuing a course in Greek, for the mysterious professor is snobbish and prejudiced. After follow-ups and a failed attempt to talk to the professor, an occasional stumble at the library with the arrogant Greek students turned things around for the worse. Papen’s curiosity, his fascination for Greek pushes him to lie, pretend to be rich, and alas, murder one of his mates. The Secret History is an engrossing tale of a bunch of Greek students who murder one amidst them. 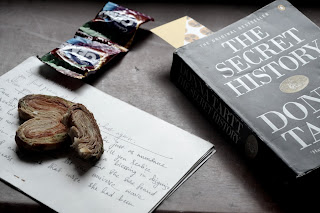 Despite being set in a college, the characters and the environment can be easily visualized as deep, dark and haunting. Every character seems to hold on a secret world within them. Perhaps it is because of these tones rendered by Tartt’s writing that makes the book qualify as a piece of work from mystery, suspense and thriller genre. The highlight of the story is the unleashing of the identity of the victim in the end.
The first two pages, the Prologue of the book is soaking wet with guilt and regret. The honesty in the words is such that it is almost like holding a beating heart in your hands and squeezing it hard. The blood, once fresh and dripping down the palms might have dried or perhaps the stains might have faded but the memory remains. The book has its own bits and pieces of flawless writing. Sometimes, when the pace slows down, the sheer beauty of expression takes over and captivates you in a trance.
The narrator, Richard Papen, a poor Northerner, has such a keen eye for the details that it gets increasingly difficult to believe that he is a man. His attention towards the appearances for the fellow protagonists makes you believe that he is perhaps gay. Then as you progress with the book, you begin to contemplate that it is most certainly Tartt’s observation skills that have been inflicted on Papen in such a way that it Papen appears feminine on more than a few occasions.
The book pleases and disappoints in places. The pace almost never dips. In an attempt to find an answer to your questions, as a reader you flip through the pages as fast as you can. The plot instills a sense of urgency in the reader. However, once the suspense element fades, so does your interest in the book. The author might be blessed with impeccable description skills but she falls short of gripping you until the very end. Nevertheless, a debut piece of work worth multiple reads.
Final Verdict: Three on five stars for the gripping characters and the magnificent descriptions that lends the story with the characteristic richness essential to make the plot stand out.