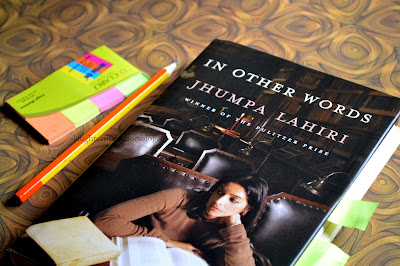 There is this thing about desires. They fill us, and yet they empty us. “In Other Words” traces the journey of the author as she enters the phase of metamorphosis to fulfil her unbearable longing to learn Italian. This book is a documentation of her struggle, the highs and lows of a journey, a path she had chosen out of sheer desire.
The book starts with a beautiful metaphor. As the reader immerses himself in the depth of those words, he paints himself a serene picture in his mind only to be hit by a jolting reality in the end. The relationship with the language ages like love. The burning lust slowly transforms itself into something selfless and the transformation is accompanied by so many realizations that it breaks your heart. There comes a part where the author is helpless and that helplessness fuels her desire; strengthens her determination to stay put.
Domenico Starnone’s words to Lahiri speak volumes about the book.

“A new language is almost a new life, grammar and syntax recast you, you slip into another logic and another sensibility.”

There comes a point in this literary journey when there seems a need to belong somewhere. Perhaps, that is the driving force behind the strong urge to learn the language in the first place. Bengali was an inherited language, whereas despite her proficiency in English and her desperate attempts at mastering the language did bear fruits, but of course, the purpose truly fit in was never fulfilled. Italian seemed like a meekly burning flame of hope and she was drawn to it like a moth to fire. The fire consumed her.
The languages formed a triangle for her life. She sums up her life with the three languages where English forms the base of the triangle. She could draw that edge of the figure with a pen. It renders stability. Rest, Italian and Bengali are drawn with a pencil, almost transient, indistinct. This triangular frame is a self portrait.

“I think that this triangle is a kind of frame and the frame contains my self portrait. The frame defines me, but what does it contain?”

This surely was the most relatable bit in the entire book for me. Born in a Bengali zamindar family, residing in a small town in Odisha, this was something that made me want to reach out to the author. While I witnessed my paternal relatives talk fluently in different dialects of Odia, my mother brought up in Kolkata, struggled to keep up with my father. Her rapport with my jethima (aunt) and my thakuma (paternal grandmother) was a different story altogether. They spoke fluently in bangal bhasha. I, on the other hand, neither spoke well in bangle, nor odia. I took refuge in Hindi and English. I have been told so many times to learn to read and write in Bangla but I never felt at home with the language.
While Lahiri continues, I feel a strange longing within myself.

“All my life, I wanted to see in the frame, something specific. I wanted a mirror to exist inside the frame that would reflect a precise, sharp image. I wanted to see a whole person, not a fragmented one. But that person was not there. Because of my double identity,I saw only fluctuation, distortion, dissimulation. I saw something hybrid, out of focus, always jumbled.” 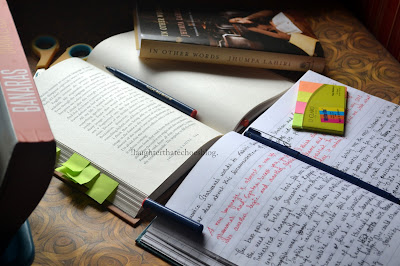 The words strike an instant chord but unfortunately the bits and pieces in Italian fail to make sense. Perhaps, it is my lack of interest in the language. The story named “The Exchange” seemed like the beginning to something beautiful but it didn’t quite pick it up from me there. The end was slightly disappointing or maybe it shall become clear over subsequent readings. From then on, the book pleased me in bits and pieces. Somehow, it felt like a dry journal entry that managed to grip me enough to reach the end. The bits and pieces motivated me that I was not alone.
And in the end, with the mixed bag of emotions that the book is, I can only summarise how it makes me feel with these few lines.